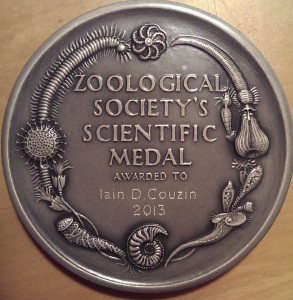 Citation for the award: “Iain’s research focuses on the collective behaviour of animals and, in particular, understanding how the actions of individuals in swarms or flocks generate the complex and coordinated behaviours shown by the group as a whole. He uses a variety of study systems (tumour cells, ants, fish, birds, humans) and his approach is highly original and interdisciplinary, involving mathematical modelling, and computational and experimental analyses. Iain’s early work on the structural dynamics of animal groups, hysteresis effects, behavioural transitions and collective memory, have significantly advanced our understanding of collective behaviour in animals.  In recent years Iain’s major achievement has been to combine theoretical approaches with empirical work, systematically testing his early theories with elegantly designed experiments. Iain has an unfailing instinct for the big-picture questions, and his vision and commitment explain the huge influence that he has had on his discipline. Much of his work has transcended the field of animal behaviour and his studies are widely known as modern classics in organismal biology. Iain has been a Royal Society University Research Fellow at the University of Oxford, and he joined Princeton University in 2007. We are delighted to present him with the Scientific Medal.”

Landseer is probably best known for the four bronze lions at the base of Nelson’s column in Trafalgar Square, commissioned by the government in 1858.  The engraving was created by William Wyon (1795–1851)

from the Birmingham family of medallists and seal engravers. Wyon worked at the Royal Mint from 1815, combining work on coinage with lucrative private commissions and he was Chief Engraver from 1828. Wyon’s accurate portraits and standard of engraving made him the preeminent medallist of nineteenth-century England.  The medal is produced by the Royal Mint, and each medal consists of 7.1458oz (202.58g) of Fine Silver.