The Jordan lab‘s recent paper on optimal social foraging in spiders, which appeared in The American Naturalist, won the 2015 President’s Award for best paper 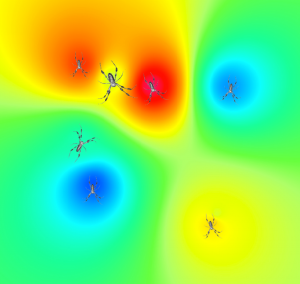 (via amnat.org): The winner of the American Society of Naturalists’ Presidential Award for the best paper to appear in the journal American Naturalist during 2014 is entitled, “Reproductive Foragers: Male Spiders Choose Mates by Selecting among Competitive Environments” and was written by Alex Jordan, Hanna Kokko, and Michael Kasumovic (Am Nat 183:638-649).

With help from editors Bronstein, Kalisz and Day, the results of my informal polling of colleagues and students, and my own reading, I was most drawn to this paper by Jordan, Kokko, and Kasumovic, among the many others that were standouts in a highly selective journal known for publishing only quality papers. Inevitably my choice was driven by my desire to be true to the mission of the society and my own inescapable limitations.

The attributes that drew me to the winning paper were its topic, the role of alternative behavioral strategies in a broad social context, and its exceptionally nice blend of theory and empiricism. The paper describes an elegant experiment involving large numbers of inherently fascinating animals: tiny male spiders selecting among enormous female spiders that vary in their fecundity and availability.

Males that seek mates by following a strategy in accord with the predictions of a model based on optimal foraging are the most successful, but not necessarily because they end up with the most fecund females. In addition to female size males are influenced by their own prior residence and the nature of other male competitors. I view the paper is an exemplar of the importance of studying mating preferences experimentally and in complex social situations that include variation in female quality and male-male competition.