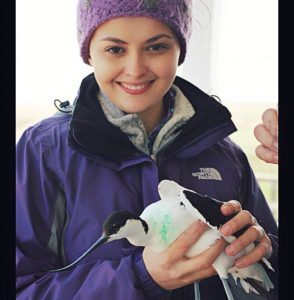 Anna is a biologist that did her bachelor in Biological Science at the University Federal of Goias (Brazil) with a focus on the conservation of South American birds. Her main goal was to produce models of spatial prioritization areas that also considered the uncertainties derived from the movement of birds due to climate change. Later on, she continued her studies at the University of Kiel (Germany), where she earned her masters degree in Biological Oceanography. During this time she used a combination of different approaches such as stable isotopes and tracking data from GPS loggers to investigate the foraging behavior of Pied Avocets (Recurvirostra avosetta) breeding in the German Wadden Sea region.  She is currently doing a Masters at the University of Konstanz and working as an student assistant in Dr. Maldonado’s experiment with zebra finches in the Farine Lab.