While collective information transfer has been suggested to have been an important benefit of group living, studies of this phenomena are very rare. In particular the dynamical properties of predation and collective evasion have been largely limited to qualitative approaches. We have developed an imaging system to allow field studies of aquatic collective dynamics which employs a novel type of sonar with unprecedented spatial and temporal resolution. This enabled us (for the first time) to relate the fast-timescale, and local, interactions among, and between species (Gulf Menhaden under real threat from hunting Spotted Seatrout), to the collective properties generated. collective response by natural schools of   A representative sample of the raw data is shown in the video below.

We quantified behavioral response using automated image analysis to determine how the internal dynamics and structure of prey schools facilitate effective collective evasion within this turbid environment, particularly as group size increases. An example of the processed video can be seen below.

Collective behavior was found to be an essential component of the strategy of predators; by forming highly coordinated hunting groups (Figure B, below, shows that predators’ nearest conspecifics lie directly ahead, and behind them, demonstrating that they form lines) predators can disrupt internal school organization, and enhance their capability to ‘slice’ groups apart. By analyzing attacks in the context of the ensuing fission-fusion dynamics we revealed that per capita risk becomes substantially higher for smaller groups, but only once they are below a critical group size (Figure A, below). This study demonstrates the fundamental importance of behavioral integration to both under conditions of informational uncertainty. 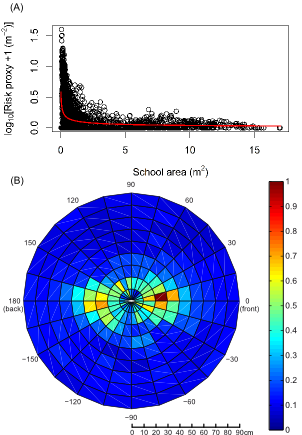 In addition to our interest to study further group hunting in other species of fish (if you have any ideas please get in touch!) we would love to study coordinated hunting behavior in mammals, and may be starting projects with both African hunting dogs and lions.