Animal groups are an effective test-bed with which to investigate distributed intelligence since individuals make effective decisions across a range of contexts and in the face of incomplete or changing information. In addition, being ubiquitous, with numerous examples found in unicellular organisms, fish and mammals (including humans), the outcome of collective decisions, such as regarding direction of travel, can be relatively simple to quantify. Thus animal groups offer an excellent opportunity to measure how individuals contribute to decisions and the effect of modifying the information that is provided to members of the collective.

Consensus decision-making and ‘voting’ in groups

We have revealed how information can be transmitted among, and highly effective decisions made by, group-living organisms without requiring signaling, individual recognition nor knowledge of the preferences of others. 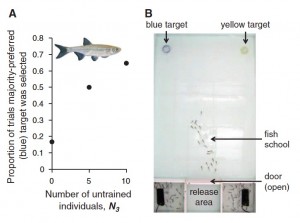 In addition to testing our predictions with schooling fish we have also done so with primate groups using high resolution GPS collars on almost all adult members of a wild, free-ranging baboon troop.

In Couzin et al. (2005), above, we made key predictions regarding the geometry of decision-making, notably that organisms should transition from ‘averaging’ the directional preferences of potential leaders if the differences in ‘opinion’ (the angle between preferred directions) is below a critical value, and spontaneously coming to a consensus decision, selecting the majority-preferred direction, above that angle. Furthermore in Couzin et al. (2011) we predicted that heterogeneity in preferences, and particularly the presence of a small proportion of individuals without strong directional preferences, would result, spontaneously, in a process of shared, or ‘democratic’, decision-making. Both of these predictions were borne out in the analysis of baboon collective motion (a comparison of the predictions of the simulation in Couzin et al. 2005 and the baboon data in Strandburg-Peshkin et al. 2015, is shown below). 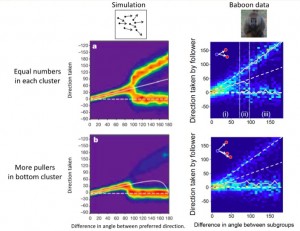 In the conventional view of group decision-making, often termed the “wisdom of crowds”, it is assumed that large groups make better decisions. In these previous studies it has been assumed that individuals make independent estimates based on the same (single) environmental cue.

However in the real world it may be rare for decisions to be made based on a single cue, and furthermore most cues will exhibit some spatial and temporal correlation (animals closer together in space are more likely to have a similar viewpoint, and experience similar odors etc.). Consequently the sensory information that near neighbors detect will also be, to some degree, correlated.

We have demonstrated that taking such natural complexity into account considerably alters the relationship between group size and decision accuracy. In only a minority of environments do we observe the wisdom of crowds phenomenon. More typically we find that a finite, and often small, group size maximized decision-making accuracy. Thus the conventional view of the wisdom of crowds may not be informative in realistic, complex environments, and that being in small groups may maximize decision accuracy across many contexts.

There are often multiple informational dimensions (color, texture, pattern etc.) in natural environments. We have demonstrated that animal groups can integrate these and achieve consensus, even though no individual is explicitly aware of, or has a unique preference for, the consensus option, and that a Bayesian decision-making framework can aid the interpretation of experimental data. A video from this experiment is shown below. 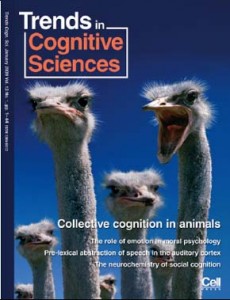 We are hoping to address these, and other, questions in ongoing, and future, laboratory and field experiments. If these questions are of interest to you and you would like to join the team, or collaborate, please contact me!

Further papers on this theme from the Couzin Lab