Locusts are a well-known global pest insect which can form swarms that extend over several hundred square kilometers  and are capable of invading up to one fifth of the Earth’s land surface during plague years. The Food and Agriculture Organization of the United Nations estimates that the desert locust alone impacts the livelihood of one in ten people on the planet. In recent years locusts have contributed to continuing and emerging humanitarian crises in Darfur and Niger, and understanding the biological features that underlie these mass migrations is of critical importance.

Prior to the formation of flying swarms, which are extremely difficult and expensive to control, flightless juveniles form vast ‘marching bands’. A key step preceding the formation of these marching bands is the expression of a dramatic form of phenotypic plasticity mediated by local conspecific density. The two phenotypic ‘phases’ exhibited by locusts termed ‘solitarious’ and ‘gregarious’ may be distinct in many traits, such as coloration, neurophysiology and behavior. However it is the behavioral transition that responds most rapidly, within a few hours, to changes in local population density.

Counter to popular belief, locusts are shy, cryptic and solitary individuals that actively avoid contact with each other. As the local density increases beyond a critical value, however, behavioral repulsion among insects declines and they begin to move towards each other and form mobile moving groups that can extend many kilometers. Locusts can return to the solitarious phase if sufficiently isolated from one another, but this may take much longer.

Despite the clear practical and scientific importance of understanding locust behavior, two persistent unknowns were, (1) why do locusts form marching bands and (2) why do locusts exhibit dramatic phenotypic plasticity. These questions have been the focus of our research.

To explore this multi-scale process I developed imaging technology capable of automatically and concurrently tracking hundreds of individuals. This technique provided what was described (at the time!) in Science  as “the most detailed description yet of the behavioral mechanism allowing social animals to form and maintain coherent, large-scale groups”. A demonstration is shown below.

In our first work we demonstrated that a change in the density of insects triggers a spontaneous transition from disorder (whereby the locusts behave much like the particles in a gas; bumping into each other but not exhibiting coherent motion) to an ordered state (whereby they form a ‘living fluid’ that flows across the landscape):

Despite the apparent cooperative nature of such enormous, coordinated bands, we revealed – using experimental manipulations of locust tactile and visual senses and nutritional state that they are, in fact, driven by cannibalistic interactions among the insects. Contact to the abdomen, and the visual approach of others from behind, increases individuals‘ propensity to march. Those that don’t move face being eaten. 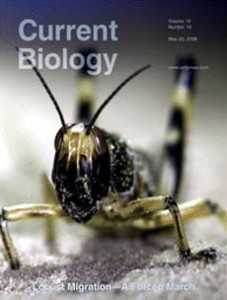 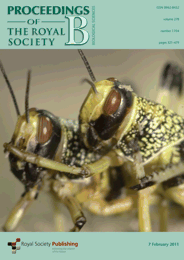 A further discovery was that locusts appear to increase the randomness of their motion in response to a loss of alignment in the group. Counter-intuitively adding noise in this way was found to bring swarms back to an ordered (aligned) state more quickly (perhaps driven by the need to reduce risk of cannibalism), thus stabilizing marching bands. Our analysis allowed us to parameterize, and test the fit of, a Fokker-Planck equation representing the coarse-grained advective and diffusive characteristics of swarm motion (a type of model which is analytically tractable but which considers flows and fluxes, as opposed to the actual motion of individuals).

Combining this understanding with that of driven ordered dynamics in statistical physics we demonstrated that selective repulsion and attraction interactions can account for the collective motion of locusts both qualitatively and quantitatively (Bazazi et al., 2011). This latter quantitative fit to experimental data has allowed us to determine the scaling with model parameters, such as insect density and their nutritional state, allowing us to make predictions relevant to field scenarios.

In addition our discovery of cannibalistic interactions provided a new process to study with respect to the evolution of locust behavior, not just with respect to swarm formation, but also the extreme phenotypic plasticity exhibited by locusts. Counter to popular belief, locusts are shy, cryptic and solitary individuals that actively avoid contact with each other. Collaborator, and friend, Prof. Steve Simpson demonstrated, in a series of remarkable papers, that it is as the local density increases that behavioral repulsion among insects declines and they begin to move towards each other and form groups. This is termed a transition from the “solitarious” to “gregarious” state, which are distinct in many traits, such as coloration (see image below, courtesy of Steve Simpson), neurophysiology and behavior. However it is the behavioral transition that responds most rapidly, within a few hours, to changes in local population density. Locusts can return to the solitarious phase if sufficiently isolated from one another, but this may take much longer.

We demonstrated, using an individual-based evolutionary model that cannibalism can also account for the evolution of density-dependent behavioral ‘phase change’ in locusts. A key (and differentiating) aspect of our modeling is that we considered a framework in which behavioral interactions and plasticity are not pre-determined, but rather they evolve. At low densities locusts’ evolutionary stable strategy is to actively avoid contact with others, resulting in solitarious-type behavior. As local density increases above a critical value, however, the favored strategy is for individuals to move away from those who approach while being attracted from those who move away. Thus, our model suggests that a low density avoidance behavior followed by a transition to gregarious behavior beyond the critical density, resulting in high density bands, are both individual-level adaptations to minimize cannibalism. our cannibalism hypothesis also accounts for the observed hysteresis in locust phase change behavior. Thus phase change minimizes the costs of cannibalism, and also may allow individuals to effectively migrate out of nutrient poor environments, providing a  novel and parsimonious explanation for the evolution of phenotypic plasticity in locusts. 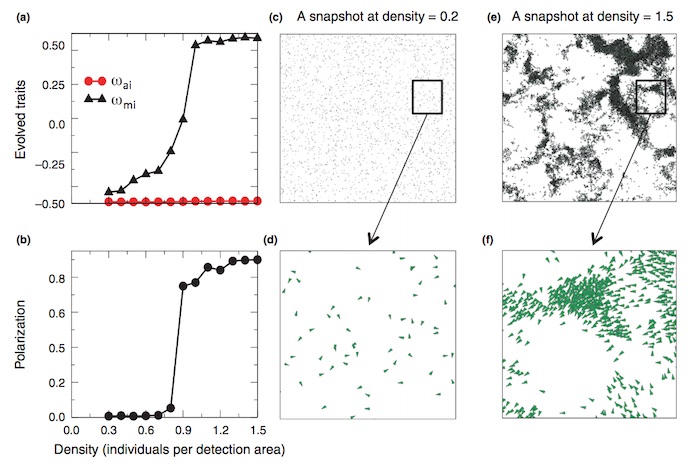 We are employing our visual field reconstruction and virtual reality technology to investigate the sensory basis of decision-making in locusts both in social and asocial contexts. In addition we are investigating the possibility of remote recording of neural activity of free-moving insects and implementing models of the insect visual system as a bridge to better map sensory input to motor output. We would also like to conduct further field experiments on locusts, and other swarming insects.